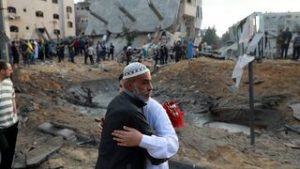 At least 109 Palestinians and seven people in Israel have been killed since fighting between Israel’s military and Hamas began Monday, May 10.

In a week that has seen the worst inter-communal violence in Israel since the start of the Second Intifada in 2000, Israel began massing land troops on its border with Gaza on Thursday May 13, launching attacks from the air and ground while Hamas continued to fire rockets into Israel.

The attacks come days after escalating violence in Jerusalem that injured hundreds of Palestinians and several Israeli police officers during protests over the planned evictions of six Palestinian families to make way for Jewish settlers.

Hamas threatened Israel not to evict the Palestinian families and on Monday fired thousands of rockets into Israel, but thousands of their rockets were intercepted by Israel’s strong missile defence system. Israel responded, attacking a meeting of senior Hamas military leaders on Wednesday in Gaza and also killing the the Gaza City Brigade commander and the heads of Hamas’ cyber arm and weapons research and development department, along with at least three other senior officials.

On Thursday night, the Israel Defense Forces announced that Israeli ground troops have joined the fight near the Gaza Strip

Tanks and artillery were deployed for the first time on Thursday, but according to the IDF no ground troops have crossed into Gaza.

In possibility of an all out war, Israel has called up 9,000 reservists and massed at least three brigades on the frontier with Gaza, which is controlled by Hamas.

The Biden administration announced it will be dispatching a State Department official to help the de-escalation efforts, while the UN, Russia, Egypt have also called for deescalation.