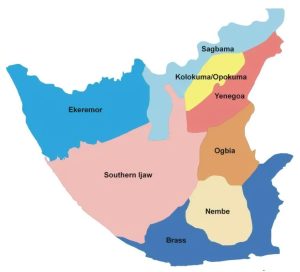 Bayelsa state police command has arraigned 12 women in court for allegedly plotting to stop the ongoing construction of the Yenagoa-Oporoma Road by the state government with juju (charms).

The women who were accused of carrying out a demonstration demanding that the road should pass through their community to give residents a sense of belonging, have been identified as Nerisa John, 43; Christiana Famous, 36; Dolphina Ochai, 34; Flora Clinton, 55; Ayibanua Lucky, 33; Motoko Oyibadoemi, 54; Amilo Brandy, 30; Tuebi Romeo, 25; Ayibaegben Godbless, 40; Becky Williams, 37; Ayababy Kwoli, 50; and Falaba David, 30.

They were accused of conspiring to commit a felony. The charge against them read;

“That you (all the accused) and others at large, on the same date and place in the aforesaid magisterial district, with intent to carry out a common purpose, did assemble in such a manner by blocking the ongoing Oporoma-Yenagoa Road construction with sticks, plantain, juju, palm fronds, causing persons in the neighbourhood to fear and tumultuously disturb the peace of the people using access road without reasonable occasion, thereby committing an offence contrary to Section 54 and punishable under Section 55 of the Criminal Code Law, Cap. C14 Laws of Bayelsa State.”

The women however pleaded not guilty and were granted bail by a magistrate’s court in Oporoma division, in the sum of N50,000 each with one surety who owned landed property.