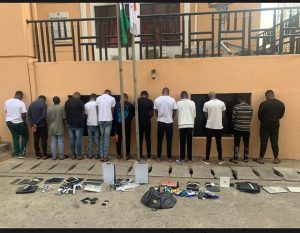 A syndicate of 13 cybercrime suspects were on Thursday March 11, arrested by operatives of the Abuja Zonal Office of the Economic and Financial Crimes Commission.

Five of the suspects were picked up at an N8m a year apartment in Gilmore Estate, Jahi, while the other eight were arrested at Katampe Extension, all in Abuja.

The raids were carried out following an actionable intelligence on their alleged criminal enterprise. iPhones, laptops, gaming consoles, 1 Toyota Avalon, and a Lexus SUV were recovered from the suspects.

The suspects have given valuable information and will be charged to court as soon as investigations are concluded.

Previous ArticleNigerian woman gives birth to triplets after 11 years of marriage
Next Article Neither Mr. President nor I have approved that the pump price of petrol should be increased by one naira – Minister of Petroleum, Timipre Sylva apologizes