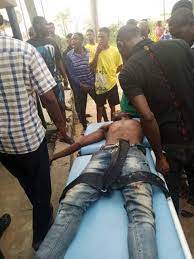 It was gathered that the 20-year-old suspect stabbed the deceased with a screwdriver over a minor misunderstanding at Sagbama community in Sagbama Local Government Area of the state.

The suspect was said to have engaged in an argument with the deceased in the early hours of Thursday, January 6, before bringing out a screwdriver spanner and stabbing him on his left rib.

According to sources from the community, the deceased was taken to the Sagbama General Hospital for medical attention but he died eventually.

Daily Trust reported that shortly after the incident, angry youths of the community took the corpse to the police station in Sagbama before returning to the barber’s shop only to discover that the suspected murderer had escaped from the scene.

Spokesman of the command, SP Asinim Butswat, who confirmed the incident, said detectives from the command have already arrested the barber, adding that he is in police detention at present.

He said the state Commissioner of Police, Nr Ben Nebolisa Okolo, has ordered for a discreet investigation of the incident, assuring that the case would be charged to court upon conclusion of the investigation.

“The unfortunate incident occurred on 06 January 2022, at Sagbama Community. One Lucky Diri ‘m’ 20 years, a Barber, allegedly stabbed one Emeka Christian Udo ‘m’ 38 years, a motorcycle rider with a screwdriver on his left ribs, over a minor misunderstanding,” he stated.

“The injured victim was immediately rushed to Sagbama General Hospital, where he died while receiving treatment. The suspect, Lucky Diri, has been arrested and detained at the State Criminal Investigation Department for further interrogation,” the PPRO added.