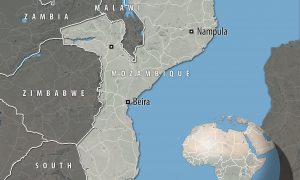 About 60 people – mostly foreign citizens have gone missing following a deadly ambush on their convoy by Islamist militants in northern Mozambique.

Islamist militants believed to be affiliated with the terrorist group Isis reportedly attacked Palma, a town in Mozambique, on Wednesday, March 24, leading to five days of fighting so far.

The attack on Palma in Cabo Delgado province, is where many foreign contractors have been working for a multibillion-dollar liquified natural gas project run by the French energy company Total.

According to reports, only seven vehicles in a convoy of 17 made it to safety after the attack on Friday, with seven confirmed dead and many injured in the recovered vehicles.

Foreign workers from South Africa, Britain, and France were said to be staying at hotels which targeted for attacks. An estimated 200 foreign workers were believed to be in the Hotel Amarula alone.

After a failed attempt to escape by sea from their hotels, a convoy of vehicles attempted to flee the besieged hotel and reach the coast before they were ambushed twice.

One of the victims, who was killed in the convoy was identified in South African media as Adrian Nel. He was reportedly killed when he, his father, and younger brother joined the convoy that attempted to break out of the Amarula Lodge hotel.

Nel’s body and family members were eventually rescued by helicopter on Saturday morning and taken to the nearby, Afungi liquid natural gas facility being constructed by Total.

His mother, Meryl Knox, told Agence-France Presse: “As they were leaving [the hotel], they were ambushed. They shot my son.

“There’s no way to possibly describe what you feel when you get news like that. It’s just devastating, body numbing, mind numbing.”

In a recording, a contractor describes the aftermath of the ambush, saying: “That thing Pierre was describing. It was 17 vehicles. We know a lot of the guys involved in that convoy. Seventeen vehicles left Amarula.

“Only seven of the vehicles made it through. In those seven vehicles that made it through were seven confirmed killed. Quite few of them had been shot and injured but they are still alive.

“The other 10 vehicles never made it through. They are unaccounted for and are basically all assumed dead.”

Between 50 and 60 people, understood to be mainly foreign nationals – were in the 10 missing vehicles. It is feared that they all died in the attack in what the US embassy in Maputo is calling a “horrific situation”.

A spokesperson for Mozambique’s defense and security forces confirmed the death of seven people in the convoy including foreigners, adding that hundreds of other people, both locals, and foreigners, had been rescued from the town.

Omar Saranga added that “dozens” of other people had been killed in the town during the fighting.

A UK Foreign, Commonwealth and Development Office spokesperson said: “Our high commission in Maputo is in direct contact with authorities in Cabo Delgado to urgently seek further information on these reports.”

Previous ArticleCouple set to welcome a child after waiting for 25 years
Next Article “Let this be the last time you will disrespect our religion”- Davido’s former PA, Aloma warns fashion entrepreneur, Toyin Lawani, over her racy nun outfit