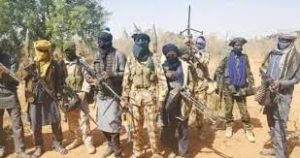 Suspected bandits have abducted a village head, Muhammad Dangaladima and six others in Kwangwami village, under Moriki Emirate in Zurmi Local Government area OF Zamfara State.

A resident who spoke to the Nigerian Tribune under anonymity, said the heavily armed men invaded the village in the early hours of Monday, November 7, 2022, and abducted the victims.

“It’s unfortunate, we are now living in fear. Bandits are now threatening us. Recently, they abducted ten of our people who are still with them (the bandits)”  he lamented.

He further revealed that the people of the area were not safe for now because bandits chase them both at farms and at their homes.

He appealed to both the state and federal governments to come to the aid of the people by deploying more security agencies to the locality.

In a similar development, bandits killed a young man in Moriki and abducted one Surajon Sani, a health personnel attached to Moriki General Hospital.