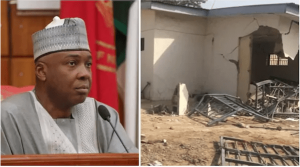 A lawsuit challenging the demolition and acquisition of the disputed land of late Dr Olusola Saraki (Ile Arugbo) by the Kwara State Government, has been struck out by a Kwara State High Court sitting in Ilorin.

The lawsuit instituted by Asa Investment Limited against the state government, was struck out for want of diligent prosecution.

This came after Counsel to the claimants, Abdulazeez Ibrahim who had earlier filed an application to substitute the late second claimant, Alhaji Baba Eleku with one Abubakar Oluwatoyin, also sought for adjournment of the case to another day to enable him to file the statement of the oath of Abubakar Oluwatoyin, adding that “he is an important party and witness in this case.”

However  Justice Abiodun Adewara who presided over the case. refused the claimant’s application for adjournment and asked them to call their first witness.

Kwara’s Attorney General and Commissioner for Justice, Salman Jawondo also responded to the application by saying “at this stage, since they cannot continue with the case, we urge the court to invoke order 39, rule 4 to strike out the case.”

Delivering his judgement, Justice Adewara said Order 39, rule 4 was not applicable in the matter, adding that “Order 39, rule 20 readily comes to mind and the claimants are not prosecuting the case diligently.”

Adewara then struck out the lawsuit for lack of diligent prosecution, before adjourning the case to March 17 for the defendants’ proof of counterclaim.

“No cause for alarm, we will brief our lead counsel who will, in turn, brief his clients.”