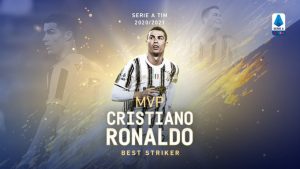 Cristiano Ronaldo has been awarded the award of best striker for the 2020-21 Serie A campaign.

The 36-year-old striker won the Serie A Best Striker award after a season in which he finished top scorer with 29 goals in 33 appearances for Juventus.

The Portugal international beat out the likes of Romelu Lukaku, who was second in the scoring standings with 24, and Zlatan Ibrahimovic, who found the net 15 times in the Italian top flight to scoop the award. 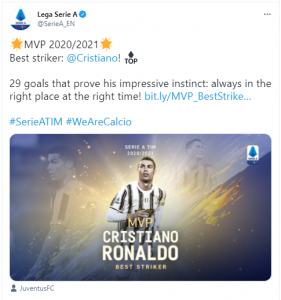 Previous ArticleNDLEA Uncovers N30bn Slush Funds
Next Article Insecurity: ”If Emeka Ihedioha had not been unjustly removed, Imo would never have descended to this level”- Reno Omokri