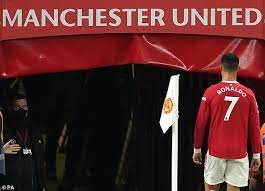 Cristiano Ronaldo is speaking out for the first time since telling Manchester United he wishes to leave the club this summer.

In a cryptic post in response to a fan account on Instagram, Ronaldo hit out at the ‘lies’ about his future and the media amid intense speculation over his next destination.

‘Impossible not to talk about me one day,’ Ronaldo wrote. ‘Otherwise the press makes no money. You know that if you don’t lie you can’t get people’s attention. Keep going that one day you get some news right.’

The Portuguese star ended the post with a crying face emoji and a laughing emoji.

Ronaldo appeared to be referencing a claim in the post from the fan account that Sir Alex Ferguson had intervened in a desperate attempt to persuade the player to remain at Old Trafford.

The 37-year-old wants to join a team who are playing in the Champions League, a competition United failed to qualify for after finishing a disappointing sixth in the Premier League last season.

But the list of potential suitors has slowly dwindled over the course of the window, with Bayern Munich, Chelsea, and Atletico Madrid turning down the chance to sign Ronaldo.