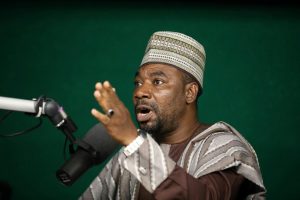 Claiming that Abba Kyari might become the Inspector-General of Police some day, the Brekete Family Radio host stated that the United States government wrongly asked for Kyari to be extradited. He also claimed that it would have been a different case if the police officer was arrested in the North-American country.

Speaking in pidgin English, he said;

“This thing wey Abba Kyari enter, many police officers dey celebrate, ineffective police officers. Some of them are gossip machines, some wey be wives, na men dem be, but dem be wives to their ogas.

“They are celebrating, they are quick to celebrate but let me tell you, whether you care to listen or not Abba Kyari is not going down by the grace of God. He has done too [much]good to go down because of one mistake, even if it is true.

“What do they have that we don’t have? We stand behind Abba Kyari, DCP Abba Kyari and God will vindicate him.

“One day this young man will become IGP, they are just envious of him because of his extraordinary performance, they can’t do half of what he is doing. He is too intelligent for their liking. He is a civil police officer, he is not pompous.

“Yes, there is an allegation on him, no matter how bad e be, name wey you give you dog naim neighbours go call am. How many of Abba Kyari we get for Nigeria in the police. For you to hold that type of office, temptation abounds,” he said.

“Una know how many cases this man don uncover? Some police officers dey wonder how hin dey do am. Some say na juju, some say na magic. He is a modern police [officer], he is using technology.

“If they had arrested Abba Kyari in America, that is a different thing, you are telling us to send our own?”

Previous Article6 people die daily from COVID19 3rd wave – Governor Sanwo-Olu
Next Article Girl, 15, dies after ‘passing out’ while having sex in car with older man