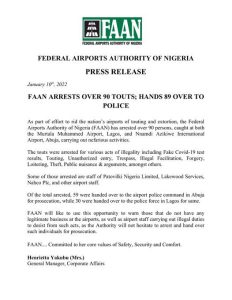 The Federal Airports Authority of Nigeria (FAAN) has arrested over 90 touts as part of its drive to rid the nation’s airports of touting and extortion.

“FAAN will like to use this opportunity to warn those that do not have any legitimate business at the airports, as well as airport staff carrying out illegal duties to desist from such acts, as the Authority will not hesitate to arrest and hand over such individuals for prosecution,” Yakubu said.

Previous ArticleThere is a N2.5 billion beef market in the southwest every day and that is the bedrock of poverty in the region – Akeredolu
Next Article NLC mobilises for protests against increase in fuel price