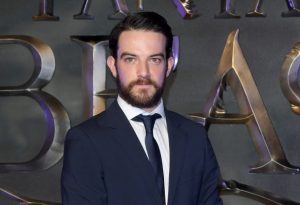 Scottish actor, Kevin Guthrie, who played Abernathy in the Fantastic Beasts franchise, has been sentenced to three years in prison for sexually assaulting a vulnerable actress when she was unwell after a night out.

The Glaswegian actor, 33, was found guilty last month of sexually assaulting the unidentified actress in September 2017, in what the judge branded a ‘heinous crime’.

Kevin took advantage of a 29-year-old woman inside the flat of fellow actor Scott Reid in Glasgow between September 30 and October 1, 2017.

The actor, who also appeared in Sunshine on Leith, insisted he had only ‘helped’ the woman after she began to feel unwell but his DNA was found inside her underwear.

Guthrie, who denied the charge, was found guilty of sexual assault at Glasgow Sheriff Court and jailed for three years.

He will also appear on the sex offenders register for an indefinite period.

Sentencing, Sheriff Tom Hughes said: ‘You had an educational background and worked extremely hard to get a part in acting in acclaimed films.

‘The court must show that women can be protected from domestic sexual offences and those who do should suffer serious consequences.

‘The offence you have been convicted caused distress and consequences to the young woman involved in this case. You committed this crime in a position of trust.

‘She was unwell and thought her drink had been spiked elsewhere that night.

‘The other man was urgently getting medical assistance and you were left in the room with her when she was not able to look after herself.

‘The jury accepted that you committed these heinous crimes and the only appropriate sentence is imprisonment.’

The court heard how the woman was due to meet Guthrie and Reid at a bar in Glasgow on the night of the alleged attack. But Reid later received a phone call from a taxi driver asking him to collect her because she felt unwell.

He and Guthrie then helped the woman into his flat and put her on a bed.

The woman claims the bedsheets were ‘moved down my body’ after Reid left the room.

She told the court: ‘I remember my top being lifted up and my bra being held down.’

The woman alleged she was groped by Guthrie before he performed a sex act on her.

She added: ‘There would be times when Scott would come back in the room and he would pull the covers back on top of me and pull my top down.’

Guthrie then carried out a further two sexual acts on her and kissed her, the court heard. He would stop when Reid would come into the room.

Prosecutor Harry Findlay asked why she did not say anything to Reid.

She replied: ‘I couldn’t… I found it difficult to communicate in any way.
‘I think I was frozen as well.’

Guthrie refuted the accusations agreeing with his QC Gordon Jackson that it had instead been a ‘panic situation’ due to the woman’s condition.

However, his DNA was found on the inside of the woman’s underpants.
Mr. Findlay asked Guthrie to explain why this was.

He said: ‘I can’t for the life of me explain in any rational sense how that happened.’

The lawyer added: ‘If ever there was a case where something appears out of character it is this.

‘This was a man who knows success, things can go to your head but he has been a decent composed individual.

‘The price he will pay will be with his own career is immense. He wasn’t a jobbing actor, he was doing well.

‘No disrespect but no matter what you do to him, this will have an effect on his future and career.’

Previous ArticleThieves steal 6ft bronze crucifix worth £20,000 from church garden of remembrance for the dead
Next Article Senator demands for good reason to impeach President Buhari