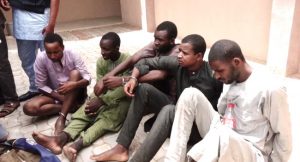 Five notorious suspects involved in banditry, kidnapping, cattle rustling, and illegal possession of firearms have been arrested by the police in Zamfara.

The suspects were paraded on Friday May 14 at the Police Headquarters in Gusau, the state capital. 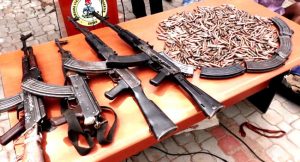 The state police spokesperson, Shehu Mohammed said the suspects were arrested as a result of the collaboration between the police and the state leadership of the Miyetti Allah Cattle Breeders Association of Nigeria (MACBAN).

Four AK-49 rifles, nine magazines, 960 live ammunition, and assorted charms were recovered from the suspects accused of terrorising various communities in Zamfara, Kaduna, Katsina States in the North West, and Niger State in the north-central part of the country.

Among those arrested is a Nigerien citizen, Shehu Ali Kachalla, a notorious gunrunner who confessed to have been in the business for more than three years. He revealed that he has sold no fewer than 450 rifles to different criminal gangs across the north-west region. 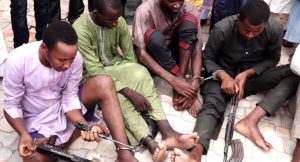 One of the kidnappers identified as Abubakar Ali, revealed that he operates within Kagarko and Chikun Local Government Areas of Kaduna State. He also confessed that he had been in the criminal business for three years and has killed five of his victims who could not afford to pay ramson to regain freedom from captivity.

Ali also disclosed that their leader pays them between N600,000 and N700,000 in any abduction that attracts N20 million ransom and above.