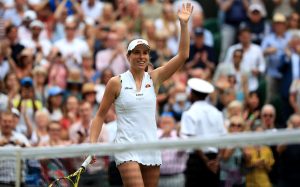 Former British No 1, Johanna Konta, has retired from tennis.

The 30-year-old has struggled with a persistent knee problem over the past couple of years and slipped to 113 in the rankings.

Konta made the announcement on social media with a post headed “Grateful”.

“All the evidence pointed towards me not “making” it in this profession. However, my luck materialised in the people that came into my life and impacted my existence in ways that transcended tennis.

“I am so incredibly grateful for these people. You know who you are.

“Through my own resilience and through the guidance of others, I got to live my dreams. I got to become what I wanted and said as a child.

“How incredibly fortunate I count myself to be. How grateful I am.”

Konta, who moved to the UK from Australia aged 14 with her Hungarian parents, hangs up her racket having achieved things that no British women’s player had managed for more than 30 years.

She won four WTA titles and reached the semi-finals of three different Grand Slams, including that dream run at Wimbledon, which ended on Centre Court at the hands of Venus Williams.

She enjoyed a strong 2019, reaching the quarter-finals of three successive slams, but has struggled since with tendonitis in her knee among other health issues, and fell out of the world’s top 100 this year. US Open winner Emma Raducanu has since taken up the mantle as Britain’s No 1.