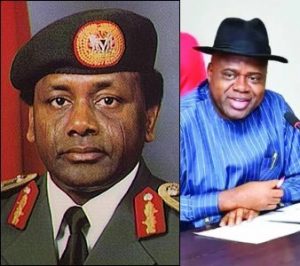 Bayelsa Governor Douye Diri has said that former military dictator, Sani Abacha, remains a hero to the people of the state following his decision to create the state 25 years ago on October 1, 1996.

He stated this during a thanksgiving service on Nigeria’s 61st independence and Bayelsa 25th anniversary at the King of Glory Chapel in Government House, Yenagoa.

In eulogizing Abacha, the Governor said;

“Let me use this medium to thank one man. He may not be popular in Nigeria but to me and all of us Bayelsans, we see him as a great man, a hero. The man who by the stroke of the pen signed the creation of Bayelsa State. I am talking about the late General Sani Abacha.

We acknowledge him as a state and people. By his singular assent, he created this state with just eight local government areas, which was less than the constitutional requirements.”