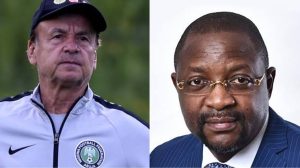 Super Eagles Head Coach, Gernot Rohr, will know his fate next week, the Minister of Youth and Sports Development, Sunday Dare, has said.

This comes as reports circulated on social media on Thursday, November 18, that the Franco-German coach had been sacked by the Nigeria Football Federation (NFF), which the NFF has denied.

Speaking during the weekly ministerial briefing in Abuja on Thursday, Dare said a decision on Rohr’s future would depend on a report to be submitted by the Nigeria Football Federation (NFF) in the coming days.

This comes days after Nigeria endured a 1-1 draw with minnows, Cape Verde, to book a spot in the next round of the 2022 World Cup qualifiers.

The match had renewed calls for the sacking of Rohr who has been in charge of the Super Eagles since 2016 .

According to Dare, the football body’s report would contain “a review of the team’s performances in recent times.”

He also said the “ministry follows due process in addressing issues concerning the national team and their coaching staff before actions are taken”.

Dare then assured Nigerians the three-time African champions will make it to the 2022 World Cup in Qatar.