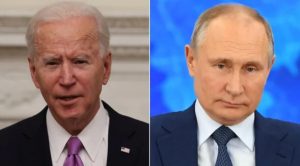 US President, Joe Biden has labelled Russian president Vladimir Putin, a ‘killer’ and promised that the Kremlim will “pay a price” for interfering in the 2020 U.S. elections.

Since Biden took over the White House in January 2021, he has pledged to take a hard line against the Kremlin, which has a history of attempting to assassinate and imprison dissidents and political opponents.

The U.S. also sanctioned seven senior Russian officials earlier this month over the poisoning and jailing of opposition leader Alexey Navalny, who is currently serving out a sentence in a remote Russian labor camp.

In a Wednesday, March 17 interview with ABC Wednesday Biden said that he believes Vladimir Putin is a “killer,” while asding that it’s possible to “walk and chew gum at the same time for places where it’s in our mutual interest to to work together” — addressing his decision to extend the New START nuclear arms control pact earlier this year.

When asked how the U.S. should respond to Russia’s election interference, Biden said.

“He will pay a price. We had a long talk, he and I. I know him relatively well and the conversation started off, I said, ‘I know you and you know me. If I establish this occurred then be prepared,'”

Referencing President George W. Bush’s famous comments about getting a “sense” of Putin’s “soul,” Biden told ABC: “I said, ‘I looked in your eyes and I don’t think you have a soul.’ He looked back and said we understand each other.”

“Look, the most important thing in dealing with foreign leaders in my experience, and I’ve dealt with an awful lot of them in my career, is just know the other guy.”

Recall in a 2017 interview with Fox News’ Bill O’Reilly, former US leader Trump said that he has “respect” for Putin and asserted that the US was guilty when it comes to killing.