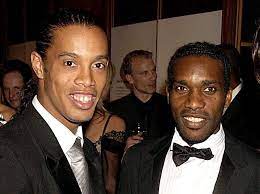 According to Eto’o, who played alongside Ronaldinho at Barcelona, Okocha didn’t receive as much accolades during his career and described it as “the injustice of world football”.

Okocha enjoyed a successful career during which he won the Africa Cup of Nations in 1994 with the Super Eagles.

Even though Ronaldinho won two FIFA World Player of the Year awards and a Ballon d’Or, Okocha never came close to claiming any of those global honours.

“It’s the injustice of world football,” Eto’o said, according to Onvoitout.

“They are in the same class’

“What we saw Ronaldinho do a few years ago, Jay-Jay (Okocha) had done 10 or 15 years before and he never had the recognition of others. And that’s what happens when it comes to Africa.”