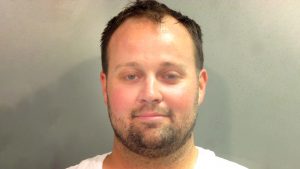 Former American reality TV star, Joshua Duggar has pleaded not guilty to receipt and possession of child pornography one day following his arrest.

The hearing was held virtually over Zoom in the Western District of Arkansas on Friday, April 30. Duggar, who wore a black and white jumpsuit, appeared from jail and was seen smiling before his hearing kicked off.

He was represented by Arkansas attorney Travis W. Story.

The United States Attorney’s Office for the Western District of Arkansas confirmed the 33-year-old former “19 Kids and Counting” star has been charged with receiving and possessing material depicting the sexual abuse of children.

Duggar is accused of allegedly using “the internet to download child sexual abuse material. Duggar allegedly possessed this material, some of which depicts the sexual abuse of children under the age of 12, in May 2019,” a release from the US Attorney’s Office states.

Duggar will remain in jail pending a detention hearing Wednesday. Wiedemann said that if he’s released on bond, he will not be allowed to have contact with children.

A trial was set for July 6.

His arrest news comes days after his wife, Anna, announced the couple was expecting their seventh child together. 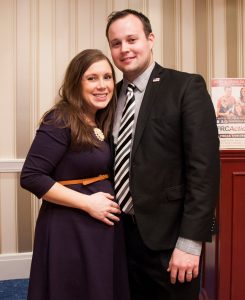