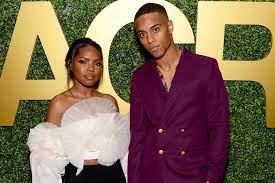 Actors Keith Powers and Ryan Destiny have called it quits after four years together.

The Tomorrow War actor, 29, and Star actress, 27, are “taking time to focus on themselves and their emerging careers but are remaining close friends,” an insider confirming the split told People.

The former couple spoke about their romance to the digital magazine We the Urban in July of 2019, revealing they first crossed paths at a Teen Vogue bash in 2015, and later pursued connecting with one another via Instagram.

“For a minute we tried to hide it for numerous reasons, but as human beings sometimes you want to just shout to the world ‘I love this person and I’m happy!'” Destiny said of their relationship in a 2019. “We try to find a balance. I’m already a private person and very career-driven so reminding people that I am my own person is important.”

Neither Destiny nor Powers has publicly addressed their split