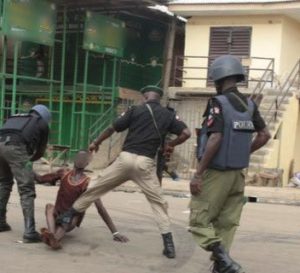 A 29-year-old man, Samuel Jacob, has been charged to court for allegedly biting off the finger of a policeman.

The accused was on Tuesday, October 12, docked in a Badagry Magistrates’ Court for allegedly biting off the index finger of Sgt Musa Hassan.

The police charged Jacob with assault and inflicting wound.

The Prosecution Counsel, ASP. Clement Okuiomose told the court that the defendant committed the offence on Oct.3, at about 11:30 a.m at Oloko, Badagry area of Lagos.

Okuiomose said the defendant also poured fuel on Sgt Hassan while he was performing his lawful duty.

The offence, the prosecution said, contravened the provisions of sections 246 and 174 of the Criminal Law of Lagos State, 2015.

The defendant pleaded not guilty to the charge.

The Chief Magistrate, Mr Fadaunsi Adefioye, admitted the defendant to bail in the sum of N200,000 with two sureties in like sum.

Adefioye adjourned the case until November 11 for mention.