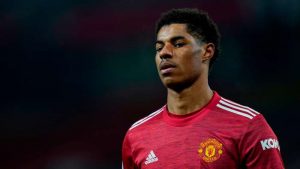 Homegrown Manchester United star,  Marcus Rashford has refused to rule out making a move away from the club, noting that he admires Real Madrid and Barcelona.

Rashford, 23, is a product of the famed academy system at Old Trafford and has taken in 270 appearances for his home-town club since bursting onto the scene as a promising teenager.

Though he is tied to a contract through to 2023 he says the option of playing abroad in the future is something that appeals to him and he wouldn’t mind if the right offer comes.

Quizzed on whether he can see himself playing in another country, Rashford told The Guardian: “I would never say no.”

Asked to identify his ideal club, the England international added:

“Other than United? I’m a big fan of Real Madrid and Barcelona, because they’ve always had great players and played attractive football.

“Everybody watches Real Madrid and Barcelona.”

He also revealed he is looking to learn Spanish and Italian.

Rashford added: “When I was growing up, learning a language wasn’t deemed important in school. There wasn’t that expectation on you.

“Football has given me the opportunity to travel to different countries, and you have certain countries you like and want to learn more about, and learning a language is definitely a part of that.”