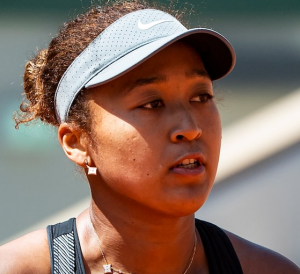 Four-time Grand Slam champion, Naomi Osaka has decided to withdraw from the French Open following the bitter fallout from her decision to boycott all media activity.

In an announcement made on Twitter, Naomi said she intends to “take some time away from the court” rather than continue to be a distraction for her stance against speaking to the press.

Last week, on the eve of the tournament, Naomi she would not face the press during the 2021 French Open, citing mental health reasons.

She said at the time: “I’ve often felt that people have no regard for athletes mental health and this rings very true whenever I see a press conference or partake in one.”

True to her word, following her win over Patricia Tig in the first round on Sunday, May 30, Osaka failed to attend the post-match press conference.

Afterward, she was threatened with expulsion over her press boycott. On Sunday, the former world number one was warned she could be thrown out of the French Open if she continues to boycott post-match news conferences at the tournament.

She was also fined $15,000 by Grand Slam organisers for failing to attend a news conference following her first-round win.

Naomi has now decided to drop out of the tournament so “everyone can get back to focusing on the tennis going on in Paris.”

She says she never intended to ignite a controversy when she cited mental health for skipping media conferences a few days ago, but she believes the best thing for her to do now is quit the tournament.

Read her statement below. 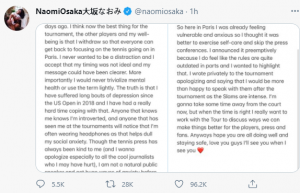 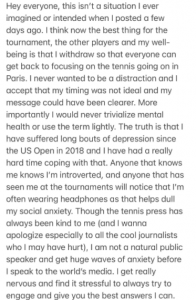 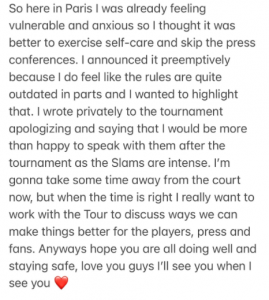 Previous ArticleThe Nigeria Govt has failed woefully in protecting the lives of the people – Mr. Macaroni
Next Article Right now Nigeria is a land flowing with bitterness and sadness – Obasanjo