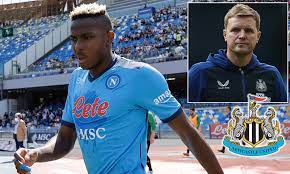 Napoli could be looking for an offer to break the £85million threshold before considering accepting a deal, according to Calciomercato.

The report suggests the Nigerian international is keen to play in the Premier League, after going from the Bundesliga to Belgium and then Ligue 1 before signing for Napoli for £67m in 2020.

The Newcastle takeover earlier this season means they could afford to sort the transfer fees and the wages that Osimhen will demand.

Boss Eddie Howe will be targeting a forward as a priority with his top goalscorer being Callum Wilson with just six goals in the Premier League.

They have already splashed out £25m on Chris Wood from Burnley in January, but still want to add another striker.