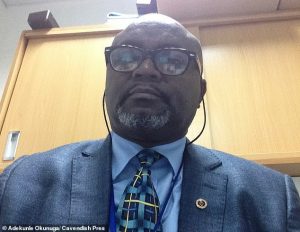 A Nigerian consultant anesthetist based in the United Kingdom who was suspended for beating his 10-year-old son has been reinstated back.

Dr. Adekunle Okunuga, 59, reportedly caned his young son with the kitchen brush for misbehaving at school and made him perform squat thrusts and stand on one leg with his arms in the air while he kicked him, Mail Online reports.

On the day of the incident, the boy named Child A – had been facing expulsion for swearing, using the word ‘rape’, and stamping on an injured girl during a PE lesson.

When his parents picked him up from school, Okunuga began slapping his son in the car from the passenger seat. Once at home, he forced his son to undertake squats and then to stand on one leg with his arms in the air.

Whenever Child A lost his balance, Okunuga reportedly hit him with the handle of the floor brush on the back of his legs and then kick him to make him stand up again.

The report also said the consultant anesthetist went to fetch a hammer and destroyed Child A’s games consoles before caning the boy across his open palms with a walking stick. He stopped when he became aware the boy had wounds on his hands that were bleeding.

The boy was treated in hospital for cuts and bruising and was later taken temporarily into foster care.

Okunuga was arrested and convicted in September 2014 at Leamington Spa magistrates court of ill-treating a child and was sentenced to eight weeks in jail suspended for a year with a requirement to complete 160 hours of unpaid work after being found guilty of serious professional misconduct by a disciplinary panel.

Earlier this month, the order was lifted and he was deemed fit to practice medicine again after the doctor, who worked at University Hospital Coventry, admitted his behaviour was ‘excessive and uncalled for’.

He blamed his conduct on his ‘cultural upbringing’ in Nigeria.

He said he had grown up in a ‘different era, when physical chastisement of children was seen as part of a child’s discipline’ but told the hearing: ‘My actions towards Child A were excessive and uncalled for, and I accept I caused harm to Child A.

‘My actions embarrassed the medical profession and brought it into disrepute and as a member of the medical community, I should be role model. I apologised sincerely to the GMC and the wider public.

‘My behaviour was born out of my cultural upbringing, I should have known better and I take full responsibility for my actions. If I were to witness a similar occurrence by one of my colleagues, I would be the first to speak up and take action and report it to the appropriate authorities.’

He added: ‘I have been working abroad but have always given full disclosure of my sanction to all employers and the relevant medical authorities.

‘I have attended courses in order to maintain my professional development and am clinically ready to resume practice in the United Kingdom where I could be of tremendous support to the medical community.’

In giving Okunuga the all-clear to return to medicine, MPTS chairman Ms. Sharmistha Michaels said: ‘Then tribunal noted that Child A was returned to Dr. Okunuga four months after the incident, and a child protection order placed on Dr. Okunuga was removed three months after this in January 2015.

‘The Tribunal was mindful this was an isolated incident and noted the 2015 Panel found that the risk of Dr. Okunuga repeating his actions was very low.

‘There has been no evidence of any repetition in the six-and-a-half years since the incident. Dr. Okunuga has reflected on his actions and developed significant insight into their impact since the hearing in 2015. He has been open and honest about his actions and apologised fully and sincerely.

‘In his reflective statement, he understands the 2015 Panel were ”fair and just in its decision”.

‘He also stated it was naïve of him to think that the incident was a ”private matter” which had no bearing on his professional conduct.

‘The tribunal considered that Dr. Okunuga had now developed sufficient insight into how his actions had impacted on public confidence and the need to maintain and uphold proper standards of behaviour.

‘His expressions of remorse are genuine and was satisfied. There are no public safety concerns in relation to Dr Okunuga. He would be fit to return to unrestricted practice in the UK given his current medical skills.’