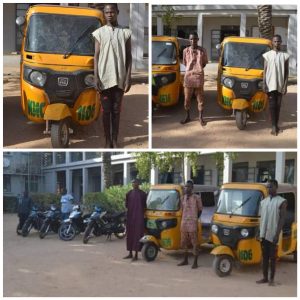 Spokesperson of the command, DSP Abdullahi Haruna Kiyawa, who disclosed this in a statement on Saturday, November 27, said that the 18-year-old suspect has been on police wanted list for armed robbery and attempted murder.

Kiyawa said that discreet investigation led to the arrest of four suspects who allegedly bought stole tricycles and motorcycles from Aljan.

“On the 24/11/2021 at about 1130hrs, team of Operation Puff-Adder led by SP Buba Yusuf while on intelligence-led patrol within Kano Metropolis arrested a wanted notorious Armed Robber, Sabitu Ibrahim, ‘m’, popularly known as “Aljan”, 18 years old, of Kaburma, Yan Daddawa, Dawakin Tofa LGA, Kano State, in possession of a Tricycle with Reg. No. GRR77QA and KAROTA No. KMC 1106,” Kiyawa stated.

“Aljan is in the wanted list of Kano State Police Command for series of Armed Robberies committed. On investigation, the suspect confessed to have conspired with one other, attacked a Tricyclist at Dorayi Quarters Kano, used a cable wire, attempted to strangulate and kill him, but he escaped with serious neck injury and they made away with his Tricycle which was found in the possession of the suspect

The suspects confessed to have bought parts of the robbed tricycle from Aljan, and another tricycle with Reg. No. FGE212QX and KAROTA No. 4636 KMC was found in their possession.

“Five (5) Motorcycles suspected to be stolen were recovered from them. On investigation, suspects confessed that the Motorcycles were stolen. Investigation is in progress.” the PPRO added.

“Anyone that identities either his Tricycle or Motorcycle should contact; 08105359575 or report to the Public Relations Office of Kano State Police Command for identification.” the PPRO added.

He urged residents to continue to pray for the State, the Nation and report incidences to the nearest Police Station and not to take laws in to their hands.

He said that rigorous Patrol and raids of criminal hideouts will continue throughout the State to complement “Operation Puff Adder”.