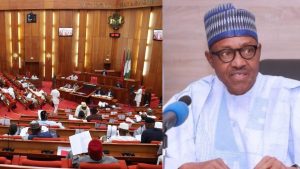 President Buhari will tonight Tuesday, July 13, host the 109 Senators of the National Assembly to a dinner at 8pm.

The scheduled meeting between members of the upper chamber and President Buhari was conveyed in a letter received from the State House and read during plenary by President of the Senate, Ahmad Lawan, on Tuesday.

The Senate had on April 27, 2021, reached a resolution for the leadership of the upper chamber to schedule a meeting with the President to enable all 109 Senators meet with him to discuss the issue of insecurity in the country.

The invitation letter from the President to the Senators reads

“I write to inform the Distinguished President of the Senate, that President Muhammadu Buhari will host a dinner of Senators of the Federal Republic of Nigeria on Tuesday, 13th July, 2021, at 8pm 20:00 hrs.

The venue is at the State House Banquet Hall, Presidential Villa, Abuja.”