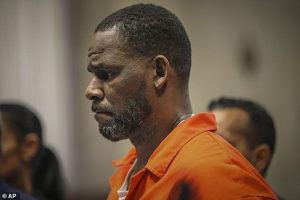 R.Kelly’s lawyer has revealed that the Grammy award winning singer has been placed on suicide watch, weeks after a New York Jury found him guilty of Child abuse and sexual offences.

Kelly who faces four separate charges alleging sexual abuse in state court in Chicago and a child prostitution charge in Minnesota faces up to life in prison after he was found guilty for similar offences in New York.

His lawyer told a federal judge in Chicago on Wednesday, October 20,
that he and another of Kelly’s attorneys will be in trial on other cases through July next year so U.S. District Judge Harry Leinenweber has now set his Chicago trial for August 1, 2022

“He has since been placed on suicide watch”

In the first court hearing since a jury found Kelly guilty three weeks ago, attorneys told the judge they estimated that Kelly’s case, along with those of co-defendants Derrell McDavid and Milton ‘June’ Brown, would last three to four weeks.

Kelly, who remains jailed in New York, was listening to the hearing on a conference call but he did not speak. His sentencing there is scheduled for May 4 and he faces up to life in prison.

Legal experts have said there is a possibility that prosecutors could drop the charges in state court if he receives a lengthy prison sentence in New York.

A New York jury found him guilty of 12 individual illegal acts, including sex with underage girls as well as a 1994 scheme to bribe an Illinois public aid official to obtain a fake ID for 15-year-old singer Aaliyah so the two could get illegally married. Kelly was 24 at the time.