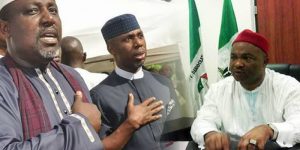 Mr. Uche Nwosu, has returned to the Supreme Court barely 24 hours after his in-law Rochas Okorocha was humiliated by aides of Governor Hope Uzodinma for reopening a property sealed by the Imo state government.

Nwosu asked the apex court to declare that Imo State Governor, Senator Hope Uzodinma was not the candidate of the All Progressives Congress (APC) based on the court’s judgment that Nwosu was nominated by both the APC and the Action Alliance.

Okorocha’s son-in-law who made the request in a fresh suit through his counsel, Mr Philip Umeadi Jnr, asked the court for an order enforcing or otherwise directing the enforcement and or giving effect to the judgement of the court in the case delivered on December 20, 2019 wherein the court held that he was nominated by both APC and AA and consequently declared his nomination a nullity.

Though the same apex court reversed itself when it declared that Uzodinma won the Imo State governorship election under APC, in the judgment nullifying his candidacy which was attached to the suit, Justice Amina Augie JSC made the following findings:

“Apparently, in arguing as he did, the appellant does not seem to grasp or appreciate the intricacies of the case against him.

“The issue was not whether his name was on the ballot paper, or whether he was the APC’s candidate at the general election itself, the issue at stake is whether he knowingly allowed himself to be “nominated” as a candidate by both APC and Action Alliance…

“…The confusing part especially for lNEC, is that within?two days, 3/1A/$ and 2/1U18, it received two forms? CF001 signed by the appellant, as Gubernatorial? candidate of two Parties – Action Alliance and APC…Form CF001 is an affidavit of personal particulars of persons?seeking election, which is provided by INEC for candidates to submit their details to it, and it derives its powers from S. 31(2) of the Electoral Act…

“…The compelling part of the story is that since nomination is complete when INEC receives the necessary documents from a Political party, its receipt of two Forms CF001, which were both sworn to by the appellant himself, leads to an irresistible conclusion that he knowingly allowed himself to be nominated as the gubernatorial candidate of the two political parties, and by Section 37 of the Electorate Act 2010 as amended), his nomination is void.”

Nwosu is asking the court to use the above findings, to hold that both the Action Alliance (AA) and the All Progressive Congress (APC) did not sponsor and/or field any candidate for the governorship election held in lmo State on March 9, 2019 in view of the double nomination of the Appellant/Respondent by the two political parties aforesaid, and his subsequent disqualification as their gubernatorial candidate, as found by this honourable court in the Judgment delivered on 20th December, 2019.

He asked the court for an order sequel to the above that Senator Hope Uzodinma was not a candidate by himself or of any party at the Imo State Governorship election held on March 9, 2019.

Nwosu also asked the court for an order directing the Independent National Electoral Commission to withdraw the certificate of return issued to Senator Hope Uzodinma, and an order sequel to the above, directing that the said gubernatorial candidate of the 3rd Respondent/Applicant in the lmo state Governorship election held on the 9th March 2019 Rt. Hon. Emeka lhedioha be immediately sworn in as the governor of lmo State.

“The court found that the Appellant/Respondent was nominated by both APC and AA as their gubernatorial candidate for the lmo state governorship election and conclusively held that he was disqualified by the provisions of S. 37 of the Electoral Act (as amended), for double nomination.

“That after the said election, the governorship candidate of the 3d Respondent/Applicant Rt. Honourable Emeka lhedioha, was returned by the 4th Respondent as the winners of the election and consequently sworn into office.

“That subsequently, the return of the governorship candidate of the 3rd Respondent/Applicant was challenged up to this court by one senator Hope Uzodinma who claimed to be the gubernatorial ‘candidate of the APC.

“That this court in its judgement delivered on January 14, 2020 held that it was the said senator Hope Uzodinma and not Rt. Honourable Emeka lhedioha that scored the highest number of votes in the election and ought to be returned as the duly elected governor of lmo state.

“That by the clear terms of the judgement in this appeal, neither the AA nor the APC fielded any candidate for the lmo state governorship election held on 9th March 2019 and as such the said Uzodinma could not have been returned as the winner of the lmo State Governorship election as a candidate of the APC.

“That APC could not have substituted the appellant with a view to further nominating the said senator Hope Uzodinma as their candidate because that right was not available to the party under the Electoral Act.

“That senator Hope Uzodinma could not have been a candidate in the election as an independent candidate as such right is not available to him. That the 3rd respondent Applicant, PDP, as the main beneficiary of the judgment ought to enjoy the fruits of the said judgement.

“That Rt. Honourable Emeka lhedioha, who is the candidate nominated by the 3rd Respondent /Applicant, and who scored the second highest number of votes after Senator Hope Uzodinma, from the judgment of this court ought therefore to be issued a certificate of return by the 4th respondent and sworn in accordingly. That it will advance the cause of justice to grant this application particularly as none of the parties will be prejudiced by its grant.”