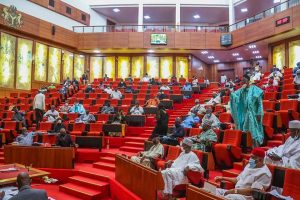 The Nigerian senate on Tuesday October 5, confirmed the nomination of Yahaya Muhammad (Yobe State) by President Muhammadu Buhari, as a board member of the Economic and Financial Crimes Commission (EFCC).

The Nation reported that while a senator representing Jigawa North East, Hassan Hadejia, said there was a discrepancy in the sequence of Muhammad’s educational experience because he was allegedly born on September 29, 1969 but started school at Central Primary School in 1968, Chairman of the Senate Committee on Anti-Corruption and Financial Crimes, Suleiman Abdu Kwari (Kaduna North) urged the Senate to confirm Muhammad and other nominees.

Commenting on the discrepancy, Hadejia said;

“My name is Senator Hassan Hadejia, representing Jigawa Northeast Senatorial District. Let me bring to the notice of the House certain discrepancies in the report, which are contradictory, especially with regards to one of the nominees, Alhaji Yahaya Muhammad, on Page 8, where the nominee, according to record, started his primary school before he was born.

“There is also an overlap in the sequence of his educational experience because here he was born on September 29, 1969 and he started his education at Central Primary School in 1968.

“Then he was in Borno Teachers’ College from 1975 and 1988 while simultaneously he was in the College of Administration Studies from 1980 to 1981.

“If these are typographical errors, Mr. President, maybe we should have them corrected for the sake of our record.”

It was reported that the Senate did not resolve or seek to correct the discrepancies Hadejia drew his colleagues’ attention to before confirming Muhammad for appointment as EFCC board member.

George Ekungu from Cross River State was confirmed as Secretary of the Economic and Financial Crimes Commission, while Luqman Muhammed (Edo); Anumba Adaeze (Enugu); Kola Adesina (Kwara) and Yahaya Muhammad (Yobe) were confirmed as board members of the EFCC.