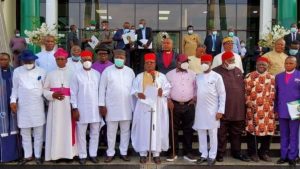 Apex Igbo socio-cultural organisation, Ohanaeze Ndigbo has been directed by South-East Governors to set up a committee that will address “unfair treatment” of Igbo people.

In a communique issued after Governors from the region met in Enugu on Sunday April 25, Ohaneze Ndigbo were also asked to set up a peace and reconciliation committee to engage Igbo people for peace and security in the region including their visitors.

The committees will become functional in the next 10 days. Governor of Ebonyi state, David Umahi also said the newly established security outfit of the region, Ebube Agu will work closely with security agencies to restore peace in affected states.

“South-east governors and leaders re-stated the adoption of a common joint security outfit called ‘Ebube Agu’, with her regional headquarters in Enugu. ‘Ebube Agu’ will work with the police and other security agencies in her operations to protect lives and property in south-east.

“We agreed on the structure and operational modalities of ‘Ebube Agu’ and to set up an advisory board for the security outfit. The honourable attorney-generals and commissioners for justice of the south-east states have been directed to work with the joint security committee to come up with the amendment of the existing state laws to reflect the new ‘Ebube Agu’ outfit.

“These committees must become functional within the next 10 days from this date.”

The Governors who reiterated their support for restructuring and state police, also condemned the attack on the country home of Governor Hope Uzodimma of Imo state.

The South-East Governors who further agreed on the implementation of various EndSARS youth empowerment programmes as soon as possible, stressed that the ban on open grazing is still in effect.