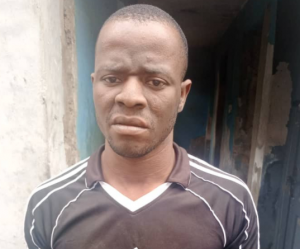 Police operatives attached to Makinde Police Station, Osodi, in Lagos have arrested a 28-year-old man identified as Jane Otubo, of No 3, Eniola Street, Mafoluku, Osodi, for allegedly engaging in the act of homosexuality.

A statement released by the spokesperson of the state police command, Ademuyiwa Adejobi, says the suspect, a foodstuff trader who hails from Enugu State had invited one Francis Azeez, m, who resides at Gwagwalada Area of Abuja, and paid for his transportation fare to his place in Mafoluku, promising to assist him to establish a business.

”Trouble broke out when Otubo made frantic attempts to have unlawful canal knowledge of the invitee who had spent a week with him.

The guest, Francis, who resisted him, made efforts to escape to Abuja in the morning when he was assaulted severally by the suspect. This attracted the neighbors’ attention who eventually informed the Police.

The Landlord of the suspect, popularly called Alfa, confirmed the allegation of Francis that the suspect had been indulging in the infamous act of which the Landlord had settled several issues relating to his improper and criminal act in this regard.” the statement read

Ademuyiwa says the state Commissioner of Police, Hakeem Odumosu, has ordered the matter be transferred to the Gender Unit of the command.