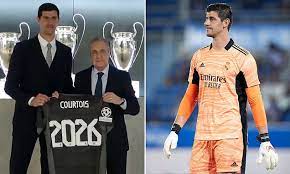 Thibaut Courtois has signed a new five-year contract at Real Madrid until 2026.

The Belgian goalkeeper has been at the club since making the move from Chelsea in the summer of 2018, and has proved to be one of the best goalkeepers in world football.

Real Madrid released a statement on Monday August 16, to confirm the news of Courtois’ new contract, which will see him stay at the club until the age of 34.

“Real Madrid and Thibaut Courtois have agreed to extend the player’s contract for five more seasons, until June 30, 2026,” read the club’s statement.

This summer Courtois featured for Belgium at Euro 2020 as they reached the quarter-finals and he has now represented his country on 89 occasions.