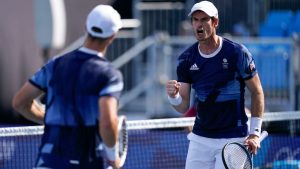 Andy Murray’s bid for Olympic gold at a third successive Games ended as he and Joe Salisbury, the UK’s representatives lost in the men’s doubles quarter- on Wednesday morning July 28 in Tokyo.

Murray, 34, and Salisbury were playing their first event together.

Murray, who won the singles at London 2012 and Rio 2016, pulled out of the individual event with a minor thigh strain to focus on the doubles.

Meanwhile, in the men’s singles, Russian second seed Daniil Medvedev is through to the quarter-finals after seeing off Italy’s Fabio Fognini 6-2 3-6 6-2.

Next up for tMedvedev is Spain’s Pablo Carreno Busta, who won 7-6 (9-7) 6-3 against Germany’s Dominik Koepfer.
Medvedev, 25, is one of those bidding to end  Novak Djokovic’s hopes of completing a first ‘Golden Slam’ – all four Grand Slams and Olympic gold in a single calendar year – in men’s tennis.

Djokovic, who has won the Australian Open, French Open, and Wimbledon titles this year, faces Spain’s Alejandro Davidovich Fokina in his third-round match later on Wednesday.