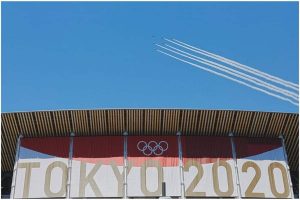 Guinea has pulled out of the Tokyo Olympics, citing a “resurgence of COVID variants”.

Guinean Minister of Sports Sanoussy Bantama Sow announced the pullout of five athletes of the country.

“Due to the resurgence of COVID-19 variants, the Government, concerned with preserving the health of Guinean athletes, has decided with regret to cancel Guinea’s participation in the Tokyo Olympics,” Sow was quoted as saying by insidethegames.com.

Guinea is not the first country to withdraw from the Games. North Korea had announced in April that it would not attend Tokyo 2020 due to the Covid-19 pandemic.

Previous ArticlePassengers rescued as boat capsizes in Lagos
Next Article We are watching and will get you anywhere, anytime – EFCC warns Yahoo Boys and “shady leaders wey dey carry our money go overseas”