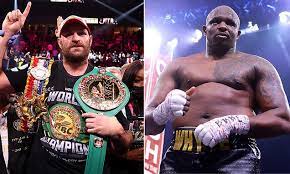 This is coming after the Gypsy King’s trans-Atlantic promotional partners Frank Warren and Bob Arum won Friday’s purse bid in Mexico City with an offer of $42 million dollars.

The Purse bids for the all-British showdown had been delayed four times this month with a final deadline falling tonight on Friday at 6pm [GMT].

The winning bid also saves Team Fury the total £20.5 million they were prepared to pay Anthony Joshua and Whyte between them to step aside to allow the Gypsy King to fight AJ conqueror Oleksandr Usyk for the undisputed world heavyweight championship.

Wembley, Cardiff, and Fury’s hometown of Manchester – possibly Old Trafford – are in the running to stage his fight with Whyte.

Warren,  in refuting Hearn’s claim that Fury had backed out of fighting Usyk first and foremost – asserted that negotiations crashed when Joshua ‘suddenly demanded an extra £5 million on top of his agreed £15 million to step aside.

That prompted Fury to lambast Joshua and Hearn as ‘the worst businessmen in the world.’

Whyte also stands to lose out to some extent financially, given the WBC have ordered a purse split of 80 to 20 percent in favour of Fury as champion.

The long-anticipated fight between Fury and Joshua will recede further if AJ loses to Usyk a second time.