The European commission has said it wants Ukraine to join the European Union.

The statement made by the European Commission President Ursula von der Leyen, comes as Ukraine defends itself against an invasion by Russia. 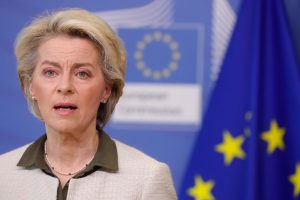 “We have a process with Ukraine that is, for example, integrating the Ukrainian market into the single market. We have very close cooperation on the energy grid, for example. So many topics where we work very closely together and indeed over time, they belong to us. They are one of us and we want them in,” von der Leyen said.

In a tweet Sunday, Ukrainian President Volodymyr Zelensky said he spoke to von der Leyen about strengthening Ukraine’s defense capabilities and its membership in the EU.

The interview comes after the EU’s announcement on Sunday to provide arms to Ukraine as its military tries to hold back Russian forces.

“For the first time ever, the European Union will finance the purchase and delivery of weapons and other equipment to a country that is under attack,” the European commission statement said.