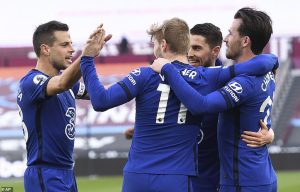 West Ham, who have enjoyed renaissance since David Moyes took over, struggled to create chances and finished the game with 10 men after Fabian Balbuena was shown a straight red card in the 81st minute after fouling Chilwell.

The Paraguay defender was then dismissed after the referee consulted VAR.

In a week when top clubs signed up for the controversial European super league, many football fans expected West Ham to upset the odds and defeat Chelsea but it was not to be as West Ham did not register a shot on target until after half-time making Chelsea extend their unbeaten run away from home under Tuchel to 10 games in all competitions. 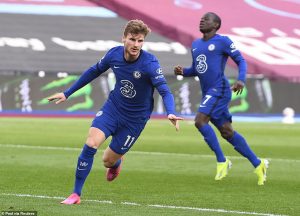 West Ham wanted a penalty when the game was goalless after Tomas Soucek’s shot struck Cesar Azpilicueta before hitting his arm, while Timo Werner missed a glorious chance to double the lead after Mason Mount’s shot was placed into his path but the striker shot it wide.

West Ham tried through out the game but couldn’t break through a resolute Chelsea defence.

West Ham remain fifth in the table, three points behind Chelsea, after Liverpool’s failure to beat Newcastle earlier on Saturday.

Previous ArticleNigerian man found dead with gunshot wounds to face and head in South Africa, N12m worth of drugs discovered in his car
Next Article Chacha Eke-Faani and husband Austin Faani welcome their 4th child