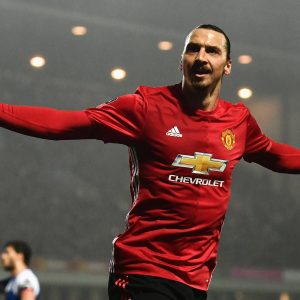 The AC Milan striker believes Manchester United’s current predicament is partly down to the club being obsessed with its past, saying: ‘You have to think about the present or you should go to a hospital and clean your head.’

Asked about United’s current problems, Zlatan told The Guardian: ‘They talk too much about the past.

‘When I went there I said: “I’m here to focus on the present and to make my own story.” But when you have too much it becomes like a loop.

‘You have to think about the present or you should go to a hospital and clean your head.’

Despite his word of warning for his former side, Ibrahimovic feels the technical quality of the Premier League was lacking somewhat.

‘I had a great experience in England. Manchester United are an amazing club and we won a couple of trophies [the League Cup and the Europa League],’ he said.

‘The quality is overrated in a technical way. But the Premier League has different qualities – the pace, the rhythm. You can be the best player in the world but if you cannot handle that pace and rhythm [you won’t succeed].

‘In Spain, France, Italy, the technique is better. That’s why there are so many foreigners in the Premier League. They bring the technical [aspect].’

The striker is still going strong for club and country at 40 years old, scoring five goals in just seven Serie A games for AC Milan so far this season and returning to the Sweden team this year.