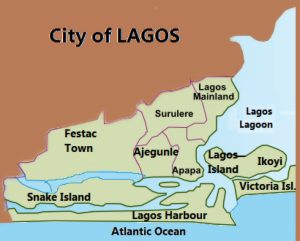 A man identified as Victor Dadeowo has reportedly stabbed his 50-year-old lover, Ajoke Esomojumi, to death.

The man carried out the act last Sunday, during an argument with the lady who sells sachet alcohol on Ikorodu Road, Lagos.

It was learnt that the argument ensued after Esomojumi’s buttocks was smacked by a customer who she was exchanging banter with. Dadeowo reportedly interpreted the customer’s action as romantic overtures.

He picked a quarrel with Esomojumi over the joke and complained bitterly until she closed the shop that night.

Dadeowo followed Esomojumi to her residence on Church Street, Ajegunle and resumed the argument which reportedly dragged to midnight when he allegedly stabbed her in the stomach.

“The woman was no longer married and lived alone. She and the man had been in a relationship for some time and he usually went to her shop. That Sunday, I learnt a customer while playing with her in his presence smacked her buttocks and he picked an offence.

“He accused the woman of being unfaithful and they quarrelled over it. It was when they returned home that night and started quarrelling again that people knew the cause of their disagreement. When things were getting out of hand, neighbours advised her to be careful and that the man could kill her.

“It was around 2am (on Monday) that she screamed and some people rushed out to find out what the matter was. By the time they got to her apartment, she was in a pool of blood.”

The suspect was subsequently arrested by police officers from Owode Onirin division.