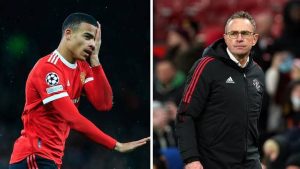 Manchester United manager, Ralf Ragnick has stated that Mason Greenwood’s arrest will not distract the club’s preparations for their FA Cup clash against Middlesbrough.

The 20-year-old was arrested on Sunday January 30, on suspicion of rape and assualt and was further arrested on Tuesday, February 1 on suspicion of threats to kill and sexual assualt, after police were made aware of claims made by his girlfriend on social media.

He was released from police custody on Wednesday on bail pending further investigation, and Manchester United insist that he will not be taking part in any training sessions or games anytime soon.

Rangnick speaking to the media for the first time since Greenwood’s arrest ahead of their FA Cup fourth round tie against Middlesbrough on Friday, February 4, said Greenwood’s scandal had not affected their training plans.

“We had a good normal week of training with five training sessions including today’s training.

“Obviously it was a topic within the team, but they’re all human beings and Mason was part of the group before we had our break.

“It was a good week of training, we could train under normal circumstances and we are looking forward to the game, it will not affect us”

The club reiterated their stance on Friday that Greenwood would not be playing any part in training or games until further notice.

“Manchester United reiterates its strong condemnation of violence of any kind. As previously communicated, Mason Greenwood will not train with, or play for, the club until further notice.” it said