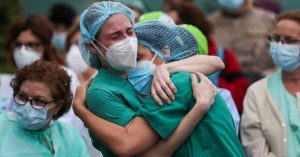 About 640 people who were fully vaccinated died with Covid-19 in England in six months (January to July) accounting for just 1% of deaths, new figures have revealed

According to a Monday morning, September 13 publication by the Office for National Statistics (ONS), of the 51,281 people who died with the virus between January 2 and July 2, some 38,964 were unvaccinated, while a tiny proportion had received two doses.

During the particular time frame, which includes the early stages of the vaccine rollout, only 640 people with complete vaccinations people died from Covid-19.

That figure represents 1.25% of the Covid deaths in the first six months of 2021.

The report adds that just 256 of those that died were among people infected more than two weeks after their second jab as it takes two weeks for full protection to kick in after a second jab.

The figures tend to prove that vaccines dramatically reduce the risk of dying with the illness.

‘13.1% of breakthrough deaths occurred in people who were identified as likely to be immunocompromised from hospital episodes or causes of death, compared to 5.4% for other COVID-19 deaths.’

However, the ONS added that some deaths are expected in vaccinated individuals as no vaccine is 100% effective.