A 15-year-old girl was allegedly gang-raped on several occasions by up to 33 men in the latest horrifying sex attack case in India.

The attacks took place at various locations in the Thane district of Maharashtra state over the last eight months, a senior police official confirmed. 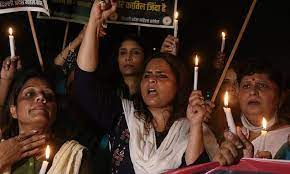 It was also reported that angry crowds had gathered outside the police station where the men are being held, to protest against the attack.

Police in the city of Dombivli registered a case on Wednesday night against 33 people accused of crimes including rape, repeated rape, gang-rape and rape of a minor, Karale said.

He added that the alleged offences were said to have happened between January 29 and September 22 of this year.

‘It all started when the lover of the girl raped her in January and made a video of the incident. He started blackmailing her on the basis of that video.

‘Later on, his friends and acquaintances gang-raped her at least on four to five occasions at different places, including Dombivli, Badlapur, Murbad and Rabale in the district,’ Business Standard of India reported Karale as saying.

A special investigative team has been formed to probe the case.

‘The victim has named 33 persons. Out of them, 24 persons have been arrested and two minors detained in this connection. The girl’s condition is said to be stable,’ Karale said.

Police are searching for the other suspects, while those already arrested will be remanded in custody until September 29.

The two minors will be remanded in custody at a children’s remand home.