Anambra State Indigenes Lawyers Forum(ASILF), has spoken against the alleged threat by the Indigenous Peoples of Biafra (IPOB) to disrupt the November 6 governorship election in the state.

Speaking at an emergency press conference on the state of affairs in the state, on Sunday, October 10, the president of the group, Joe Nwokedi said that there must be election in Anambra State and a peaceful one at that. 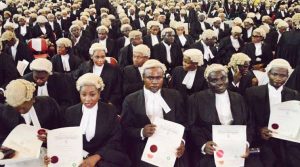 According to him, IPOB must not disrupt the election, adding that doing that would even work against them.

Nwokedi said that IPOB should be aware that they will be seen negatively by the international community if they disrupt elections and that might warrant declaring them a terrorist organisation.

Additionally, the publicity secretary of the group, Anene Nwadukwe, expressed his dismay at the threat by the Attorney General of the federation, Abubakar Malami to declare a state of emergence in Anambra State.

He said that section 305 of the Nigerian constitution stated the conditions under which a state of emergency could be declared,adding that Anambra hasn’t gotten that bad.