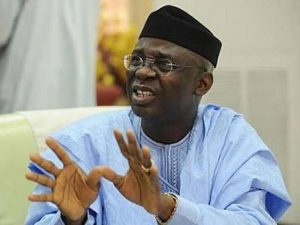 Speaking at the church service on Sunday, October 10, Bakare said the constitution should be replaced if the country wants to achieve greatness.

“I am persuaded, as are many fellow compatriots within and outside the shores of Nigeria, that the 1999 constitution, whether as amended or to be further amended by the national assembly, is nothing more than a glorified death certificate,” he said.

“Let us borrow a leaf from recent world history. Once upon a time, the Berlin wall separated eastern Germany from western Germany, until president Ronald Reagan, in his indomitable manner, spoke lucidly on live television to the president of the then Soviet Union. He said, ‘Mr Gorbachev, tear down this world’. Mr Gorbachev eventually did and Germany is better off for it today.

“In the same spirit, I say to President Muhammadu Buhari, ‘Stop passing the ball to the national assembly. Tear down this inhibiting concoction of a constitution; tear it down so that we can build a truly great nation. This is one enduring legacy your administration can still secure before your time in power draws to a close. If you do, present and unborn generations of Nigerians will remember you for it and write your name in gold when the history of this period is written. If you don’t, history will record that you failed to rise to the occasion and you squandered a great opportunity.’

“Those clamouring for and waiting for genuine change to happen through the upcoming 2023 presidential election, without first insisting that our imposed sham of a constitution must be torn and discarded, are merely putting the cart before the horse. This is nothing but a prescription for retrogression.”

Bakare added that the country needs a geopolitical structure that will help every zone to maximise its economic opportunities.

According to him, this can be achieved by a “pragmatic approach to restructuring Nigeria, rather than by mere zoning of the presidency”.