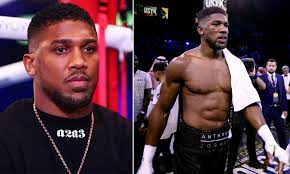 The British-Nigerian boxer suffered a second-straight defeat by Oleksandr Usyk in August, having lost his WBA, WBO, and IBF belts to the Ukrainian mastermind in September last year.

Joshua says the fact he is no longer a champion ‘hurts’ and that his emotions are ‘affecting his ring activity’. However, he insists he’ll be ‘ready to fight again next year’

Speaking to DAZN, Joshua said: ‘My life is complicated. Boxing has become a bit complicated for me.

‘Everyone is just trying to make the most of this time while I’m boxing and they’re doing a good job.

‘But it does affect my ring activity. So I’m just always trying to push that stuff away. It’s a challenge. I’m just trying to get it out the way this year, so next year I can just focus.

‘I’m not champion and it’s just hurting a lot. So I’m in the gym rebuilding and restructuring everything I have to do inside and outside of the ring.

‘There is a lot that goes on outside the ring in my life which makes my ring life complicated.

‘So I just need to simplify a lot of stuff outside the ring and then I can put my full attention in the ring. And once I’ve got that done, next year I’ll be ready.’

He has since been linked with a potential fight against Deontay Wilder in 2023 – with Eddie Hearn confirming both parties have entered talks over a potential deal.

However, AJ has remained coy over his future. He said he doesn’t ‘want to make statements and then get held to the cross’.

‘I’ll be in the ring when I’m in the ring. I don’t want to make statements today and then I’ll get held to the cross. Do you know what I mean? When I’m ready, I’ll be back in the ring.’