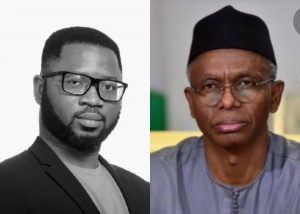 It all started after the governor reacted to the recent vandalization of public infrastructure by some aggrieved youths in the state. 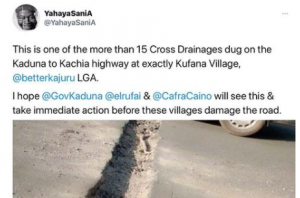 ”This destruction of public infrastructure is a crime under the Miscellaneous Offenses Act. The vandals masquerading as “aggrieved youths” have been arrested & will be vigorously prosecuted. Kufana residents will pay for the reinstatement from their LG FAAC allocation.”

Ayo had a different opinion as he stated that instead of picking jailing, fining, and banning the aggrieved youths, the governor should adopt creative solutions to resolve the issue.

”It’s fine if your govt wants to jail everyone but you should understand than not all social problems will be solved by jailing, fining, and banning. Sometimes, creative solutions – like putting a proper speed bump on the road – is all that is needed to resolve the issue.”he tweeted

His tweet appears to have robbed off wrongly on Governor El-Rufai who fired back at him, describing him as a populist.

”Mr Populist @ayosogunro  When you are elected Governor, you can apply your shallow, but ‘innovative’ solutions in response to conduct of vandals & sundry criminals. In Kaduna State, till May 29, 2023 in sha Allah I have the mandate of 1.1m voters to enforce the laws of the land.”

”I’m not even popular talk less of being populist. But that aside, the picture was a speed breaker not just casual vandalism. Even your tweet says it was done by aggrieved youths, not some random criminals. Do you care about addressing the reason why they were aggrieved?” 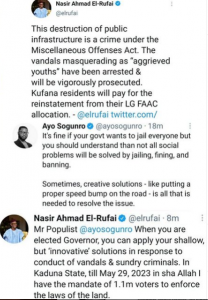 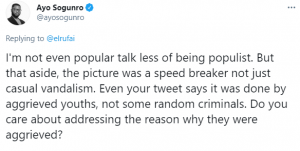