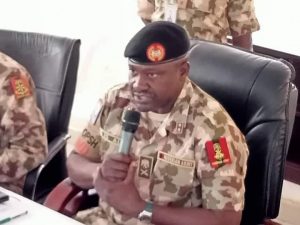 Troops of Operation Safe Haven (OSPH) have arrested eight suspects in connection with the murder of three women on a farm close to Rafin Bauna general area of Bassa local government, Plateau State.

It was gathered that the women identified as Sarah Ishaya, Sibi Yakubu and Seri Danladi, were shot dead by the gunmen suspected to be Fulani herdsmen on Tuesday, August 10.

The OPSH in a statement signed by the Military Information Officer, Major Ishaku Gaji Takwa, said that the suspects were arrested on Tuesday, August 10.

“The troops earlier responded to a distress call that three women were shot on their farm close to Rafin Bauna by unknown gunmen. Troops immediately mobilised to the scene and discovered two of the three women were shot dead on the spot, while one of the women sustained gunshot wounds. The bodies were recovered while the injured woman was evacuated to a medical facility for medical care. Unfortunately, she later died while receiving treatment,” the statement read.

According to the statement, the general area was immediately cordoned off and eight suspects were arrested in connection with the shooting incidence adding that the suspects are currently in the custody of OPSH and are undergoing interrogation.

“The Commander OPSH Major General Ibrahim Ali has once again charged personnel to remain vigilant and take necessary measures to clamp down on criminal elements in the communities.

“The Commander also urged law abiding citizens to always make use of the help center lines distributed to provide information to troops for prompt action. He reassured of his commitment to deal decisively with those bent on causing trouble in Plateau state and environs.

Meanwhile, the Publicity Secretary of the Miango Youth Development Association, Nuhu Bitrus, who confirmed the killings on Wednesday, August 11, said the deceased were among those earlier displaced when killer herdsmen attacked their communities in a four day siege from July 30 to August 4.

Bitrus said the victims had left their camp in the neighbouring Miango town to Jebu Miango in search of food for other IDPs when they were attacked and killed by the gunmen.

“I can confirm that three of our people have been killed in Jebu Miango. The victims were three women who were among those who escaped during the recent attack in Jebbu Miango. Jebbu Miango is the community where over 400 houses were burnt last week during an attack by Fulani gunmen who also killed several people, forcing the survivors to flee their homes,” Bitrus said.