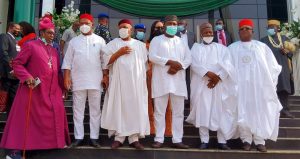 A delegation from the Federal Government led by the Minister of Defence, Retired Maj. Gen. Bashir Magashi, Governors of the five States of the South East and other leaders of political, religious and traditional institutions in the zone, met at the Enugu state government house today June 11 where they discussed the security challenges confronting the region in particular and Nigeria in general. 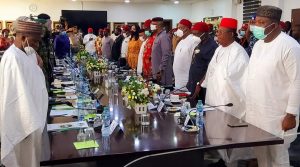 Addressing newsmen after the meeting, the Defence Minister, Magashi, disclosed that the delegation will relay the commitment reached at the parley and other outcomes of the consultation to President Muhammadu Buhari. 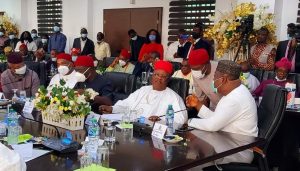 The Defence Minister who was accompanied by his Interior Ministry counterpart and the Service Chiefs, explained that they were in Enugu for a consultative meeting with leaders of the South East zone on the issues of instability and criminality, at the instance of President Buhari.

He added that the meeting agreed that there were fundamental issues that need to be addressed in the South East region.

The leader of the Presidential delegation stated that one of the issues is the farmers/ herders conflict which, he said will “be given the necessary accord to stop this menace all over the country, from the perspective of national interest”.

Magashi revealed that the second issue they discussed was “the problem of marginalization”, stressing it “is well accepted and further discussion will continue after we have met with Mr. President to see their grievances and after the governors will articulate the grievances so that we can have further discussion on them”. 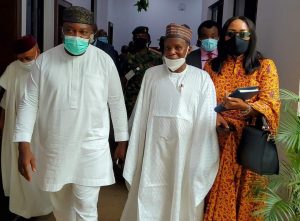 The Minister further disclosed that the delegation endorsed the Community Policing Model of the South East governors, adding that it “should be encouraged because we have set precedence in the Amotekun in the Western part of the country”.

“We appreciate our discussions. We are most humbled and I think each one of us; the governors, the elders, the religious leaders were able to say one or two things.

We would put our heads together to see that peace and stability of this nation are brought back to normalcy in no distance time.

In an address at the meeting, the Governor of Ebonyi State and Chairman of South East Governors Forum, Dave Umahi, on behalf of the leaders of the zone, restated their commitment to national unity, saying that “this sincere commitment is a new dawn not only to South East but to entire Nigeria”.

Commenting on the ban on open grazing, Gov. Umahi said

The South East Governors Forum Chairman noted that the commitment of the Federal Government towards addressing all the issues pertaining to herdsmen in the South East is very important.

He stated that the governors have agreed to articulate all the grievances and concerns of the people of the South East “as spelt out by the Ohanaeze Ndigbo”, saying: “We are happy that there is genuine willingness for further dialogue on such issues”.

“Those who dish out hate speeches from our region, threat of violence or secession do not speak for South East. I repeat, we the South East people are not for secession, we don’t support it; we don’t call for it.

“We condemn the killings of security men and innocent people in the South East and the governors are doing everything possible to ensure the safety of our people. We are supporting the security agencies. We finally appeal to our people to continue to engage our youths to eschew violence”.

Earlier in his opening remark, Governor Ifeanyi Ugwuanyi of Enugu State, described the Town Hall meeting as timely and apt, expressing optimism that the outcome of the meeting will address the security challenges in the South East zone.

Gov. Ugwuanyi who stressed the need for all government structures to uphold the security and welfare of the people as the primary purpose of government (enshrined in the 1999 Constitution), said that the consultation with the Service Chiefs and critical stakeholders of the South East zone, on the current security challenges, “underscores the centrality of this security responsibility in our consideration”.