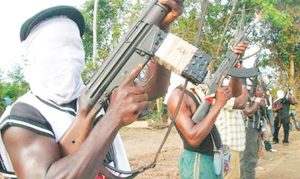 Venue of Enugu state chapter of the All Progressives Congress reconciliation meeting, was on Tuesday evening,  January 18, reportedly invaded by gunmen numbering about seven.

Two chieftains were allegedly killed during the attack at the party office at Ward III Obeagu Awkunanaw, Enugu South Local Government Area. A chieftain was abducted, while another was left with gunshot injuries.

The Nation reported that the eyewitness said;

“The meeting was underway when these men invaded the place and shot and killed the immediate past Enugu South local government chairman of the party.

“Ezeoha was also elected as the incumbent state youth leader in one of the factions of the party. One other person I don’t know his name was equally killed instantly.

“Hon. Monday Ogbonna (Okwadike), a factional chairman of the party in our area was kidnapped.

“One person is lying critically wounded at the hospital and we don’t know his fate.”